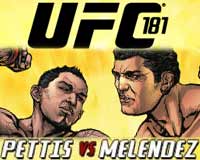 Review: 2014-12-06, great fight between Anthony Pettis and Gilbert Melendez: it gets three stars (UFC Performance of the Night). The black belt in tae-kwon-do Anthony Pettis entered this fight with a pro mma record of 22-3-0 (82% finishing rate) but he is not ranked as he hasn’t fought since August 31, 2013 when he defeated Benson Henderson in their second fight winning the Ufc Lw belt (=Henderson vs Pettis 2).
His opponent, the black belt in Brazilian jiu-jitsu and former Strikeforce Lw champion Gilbert Melendez, has a record of 22-3-0 (55% finishing rate) and he entered as the No.4 lightweight in the world, he suffered his last defeat in 2013 when he faced Benson Henderson (via split decsion, Henderson vs Melendez); after this bout he came back to win beating Diego Sanchez in one of the best mma fights of 2013 (=Melendez vs Sanchez). Pettis vs Melendez is valid for the Ufc lightweight title (Pettis’ first defense); undercard of Johny Hendricks vs Robbie Lawler 2 – UFC 181. Watch the video and rate this fight!