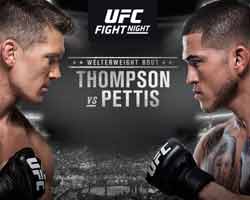 Review by AllTheBestFights.com: 2019-03-23, good finish between Stephen Thompson and Anthony Pettis: it gets three stars (UFC Performance of the Night).

The black belt in karate and ju-jitsu Stephen Thompson entered this fight with a mma record of 14-3-1 (57% finishing rate) and he is ranked as the No.5 welterweight in the world (currently the #1 in this division is Kamaru Usman) but he lost two out of his last three fights, against former #1 Ufc champion Tyron Woodley (Woodley vs Thompson 2) and with Darren Till (Stephen Thompson vs Darren Till); between these two bouts he beat Jorge Masvidal (Stephen Thompson vs Jorge Masvidal).
His opponent, the black belt in tae-kwon-do, Bjj and former Ufc Lw champion Anthony Pettis, has an official record of 21-8-0 (81% finishing rate) and he entered as the No.11 lightweight but he lost six out of his last nine fights. Last year he beat Michael Chiesa (Anthony Pettis vs Michael Chiesa) and he was defeated by Tony Ferguson (Tony Ferguson vs Anthony Pettis). Thompson vs Pettis is the main event of UFC Fight Night 148 (UFC on ESPN+ 6). Watch the video and rate this fight!