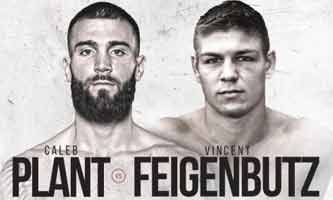 Review by AllTheBestFights.com: 2020-02-15, one sided fight between Caleb Plant and Vincent Feigenbutz: it gets two stars.

The undefeated Ibf super-Mw champion Caleb Plant entered this fight with a perfect boxing record of 19-0-0 (11 knockouts) and he is ranked as the No.8 super middleweight in the world (currently the #1 in this division is Callum Smith). In his last three fights he has won over Rogelio Medina, Jose Uzcategui (Jose Uzcategui vs Caleb Plant) and Mike Lee (Caleb Plant vs Mike Lee).
His opponent, the former Wba super-Mw champion Vincent Feigenbutz, has a record of 31-2-0 (28 KOs=90%) and he entered as the No.21 in the same weight class. He lost the rematch with Giovanni De Carolis in 2016 (Vincent Feigenbutz vs Giovanni De Carolis 2) but then he has won ten consecutive fights defeating Przemyslaw Opalach (Vincent Feigenbutz vs Przemyslaw Opalach) and Cesar Nunez in 2019 (Vincent Feigenbutz vs Cesar Nunez). Plant vs Feigenbutz is valid for the IBF World super middleweight title (Plant’s second defense). Watch the video and rate this fight!