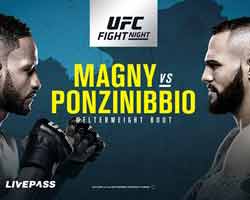 Review by AllTheBestFights.com: 2018-11-17, good fight between Neil Magny and Santiago Ponzinibbio: it gets three stars (UFC Performance of the Night).

Neil Magny entered this fight with a mma record of 21-6-0 (48% finishing rate) and he is ranked as the No.10 welterweight in the world (currently the #1 in this division is Tyron Woodley). He lost to Rafael dos Anjos last year (dos Anjos vs Magny) but then he has beat Carlos Condit (Carlos Condit vs Neil Magny) and Craig White (Neil Magny vs Craig White).
His opponent, the black belt in Bjj Santiago Ponzinibbio, has an official record of 26-3-0 (77% finishing rate) and he entered as the No.17 in the same weight class. He suffered his last defeat in 2015, against Lorenz Larkin (Larkin vs Ponzinibbio), but then he has won six bouts beating Gunnar Nelson (Nelson vs Ponzinibbio) and Mike Perry in his last two (Santiago Ponzinibbio vs Mike Perry). Magny vs Ponzinibbio is the main event of UFC Fight Night 140. Watch the video and rate this fight!

(Free embeddable video hosted on Youtube and not uploaded by AllTheBestFights)
https://www.youtube.com/watch?v=W4rCCWWhMU8