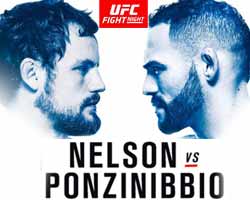 Review by AllTheBestFights.com: 2017-07-16, nice exchanges between Gunnar Nelson and Santiago Ponzinibbio: it gets three stars (UFC Performance of the Night).

The black belt in karate and Brazilian jiu-jitsu Gunnar Nelson entered this fight with a professional record of 16-2-1 (94% finishing rate) and he is ranked as the No.17 welterweight in the world. He lost to Demian Maia in 2015 (=Maia vs Nelson) but then he has won over Albert Tumenov (=Tumenov vs Nelson) and Alan Jouban (=Nelson vs Jouban).
His opponent, the black belt in Bjj Santiago Ponzinibbio, has an official mma record of 24-3-0 (79% finishing rate) and he entered as the No.24 in the same weight class. He also suffered his last defeat in 2015, against Lorenz Larkin (=Larkin vs Ponzinibbio), but then he has won four bouts beating Andreas Stahl, Court McGee, Zak Cummings (=Ponzinibbio vs Cummings) and Nordine Taleb (=Ponzinibbio vs Taleb). Santiago Ponzinibbio vs Gunnar Nelson is the main event of UFC Fight Night 113. Watch the video and rate this fight!