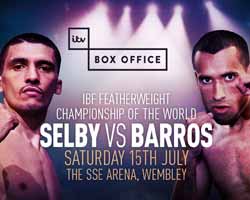 Review by AllTheBestFights.com: 2017-07-15, some good exchanges between Lee Selby and Jonathan Barros but it is not enough to get three stars: it gets two.

The Ibf Fw champion Lee Selby entered this fight with a boxing record of 24-1-0 (9 knockouts) and he is ranked as the No.6 featherweight in the world (currently the #1 in this division is Leo Santa Cruz). He suffered his only loss when he faced Samir Mouneimne in 2009, since then he has won 20 consecutive fights beating Eric Hunter in 2016 (=Selby vs Hunter) and Andoni Gago in 2017 (=Selby vs Gago).
His opponent, the former Wba Fw champion Jonathan Victor Barros, has an official record of 41-4-1 (22 knockouts) and he entered as the No.12 in the same weight class. He lost two consecutive bouts in 2012, against Juan Carlos Salgado (=Salgado vs Barros) and Mikey Garcia (=Garcia vs Barros), but then he has won seven fights defeating Satoshi Hosono in 2016. Lee Selby vs Jonathan Victor Barros is valid for the IBF World featherweight title (Selby’s third defense); undercard of Chris Eubank Jr vs Arthur Abraham. Watch the video and rate this fight!