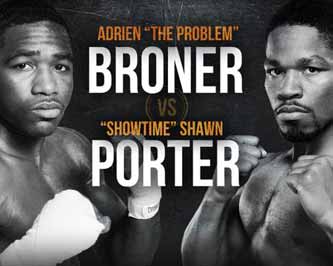 Review by AllTheBestFights.com: 2015-06-20, disappointing fight with too many interruptions: Adrien Broner vs Shawn Porter gets two stars.

Shawn Porter entered this fight with a boxing record of 25-1-1 (16 knockouts) and he is ranked as the No.7 welterweight in the world (currently the #1 in this division is Floyd Mayweather Jr). He suffered his only loss last year when he faced Kell Brook at his second defense of the Ibf Ww title (=Porter vs Brook); after this bout he came back to win beating Erick Bone (=Porter vs Bone).
His opponent, Adrien Broner, has an official record of 30-1-0 (22 knockouts) and he entered as the No.13 in the same weight class. The only man who stopped him in twelve rounds was Marcos Maidana in 2013 (=Broner vs Maidana); since then he has won three bouts defeating John Molina Jr in his last fight (=Broner vs Molina). ‘AB’ Broner vs Porter is the main event of the evening. Watch the video and rate this fight!