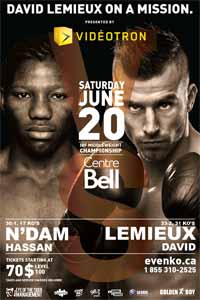 Review by AllTheBestFights.com: 2015-06-20, some good exchanges between Dierry Jean and Jerry Belmontes but it is not enough to get three stars: it gets two.

Dierry Jean entered this fight with a pro boxing record of 28-1-0 (20 knockouts) and he is ranked as the No.10 lightweight in the world. He suffered his only loss last year when he faced Lamont Peterson (=Peterson vs Jean), after this bout he has won three fights beating Carlos Manuel Reyes in his last one.
His opponent, Jerry Belmontes, has a record of 19-6-0 (5 knockouts) and he entered as the No.36 super featherweight but he comes three consecutive defeats: against Omar Figueroa (=Figueroa vs Belmontes), Abner Cotto (=Belmontes vs Cotto) and Miguel Vazquez. Jean vs Belmontes is valid for the NABF lightweight title; undercard of David Lemieux vs Hassan N’Dam N’Jikam. Watch the video and rate this fight!