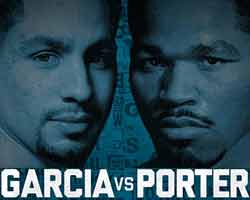 Review by AllTheBestFights.com: 2018-09-08, some good exchanges between Danny Garcia and Shawn Porter but it is not enough to get three stars: it gets two.

The former world champion in two different weight classes Danny Garcia entered this fight with a boxing record of 34-1-0 (20 knockouts) and he is ranked as the No.6 welterweight in the world (currently the #1 in this division is Terence Crawford). He suffered his only loss when he faced Keith Thurman last year (via split decision Keith Thurman vs Danny Garcia), after this bout he came back to win against Brandon Rios in 2018 (Danny Garcia vs Brandon Rios).
His opponent, the former Ibf Ww champion Shawn Porter, has an official record of 28-2-1 (17 knockouts) and he entered as the No.4 in the same weight class. He also lost to Keith Thurman, but via unanimous decision and in 2016 (4-stars fight, Thurman vs Porter), then he has won over Andre Berto (Porter vs Berto) and Adrian Granados (Shawn Porter vs Adrian Granados). Garcia vs Porter is valid for the vacant WBC World welterweight title. Watch the video and rate this fight!