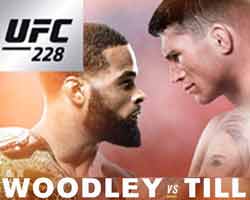 Review by AllTheBestFights.com: 2018-09-08, good fight between Tyron Woodley and Darren Till: it gets three stars (UFC Performance of the Night).

The current Ufc Ww champion Tyron Woodley entered this fight with a professional mma record of 18-3-1 (61% finishing rate) and he is ranked as the No.1 welterweight in the world. He suffered his last loss when he faced Rory MacDonald in 2014, since then he has collected five victories, winning the Ufc title against Robbie Lawler (Lawler vs Woodley), and one draw, against Stephen Thompson at the end of 2016 (Woodley vs Thompson I); after this bout he has beat Thompson in their rematch (Woodley vs Thompson II) and also Demian Maia (Tyron Woodley vs Demian Maia).
His opponent, the undefeated Darren Till, has an official record of 17-0-1 (71% finishing rate) and he entered as the No.3 in the same weight class. The only man who stopped him in a draw was Nicolas Dalby in 2015 (Dalby vs Till), after this fight he has won over Jessin Ayari, Bojan Velickovic, Donald Cerrone (Donald Cerrone vs Darren Till) and Stephen Thompson (Stephen Thompson vs Darren Till). Woodley vs Till, main event of Ufc 228, is valid for the Ufc welterweight title (Woodley’s fourth defense). Watch the video and rate this fight!

Result: Click here to show the fight’s result
Tyron Woodley def. Darren Till (Submission at 4:19, round 2)

Till’s next fight: Darren Till vs Jorge Masvidal

Woodley vs Till Fight Video:

(Free embeddable video hosted on youtube/Facebook and not uploaded by AllTheBestFights)
https://www.youtube.com/watch?v=6whLkF5xRtY