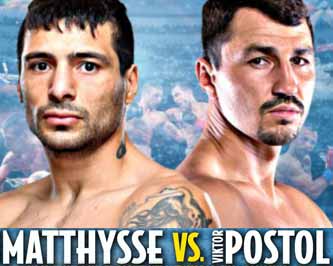 Review by AllTheBestFights.com: 2015-10-03, disappointing fight between Lucas Matthysse and Viktor Postol: it gets two stars.

Lucas Martin Matthysse entered this fight with a professional boxing record of 37-3-0 (34 KOs=92%) and he is ranked as the No.2 super lightweight in the world (currently the #1 in this division is Terence Crawford). He suffered his last loss in 2013 when he faced Danny Garcia (=Garcia vs Matthysse), since then he has won three consecutive fights beating Ruslan Provodnikov in his last one (=Matthysse vs Provodnikov).
His opponent, the undefeated Viktor Postol, has a perfect record of 27-0-0 (11 knockouts) and he entered as the No.4 in the same weight class; he beat Selcuk Aydin (=Postol vs Aydin) and Jake Giuriceo in his last two bouts. Matthysse vs Postol is valid for the vacant WBC World super lightweight title. Watch the video and rate this fight!