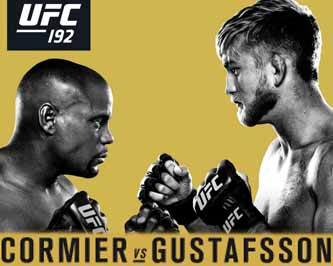 Review by AllTheBestFights.com: 2015-10-03, great performance by both fighters: Daniel Cormier vs Alexander Gustafsson gets three stars (UFC Fight of the night).

The former Strikeforce Hw champion Daniel Cormier entered this fight with a professional mma record of 16-1-0 (69% finishing rate) and he is ranked as the No.2 light heavyweight in the world. He has already fought twice in 2015 losing to #1 Jon Jones (=Jones vs Cormier ) but then he has won the vacant Ufc light-Hw belt against Anthony Johnson (=Johnson vs Cormier).
His opponent, Alexander Gustafsson, has an official record of 16-3-0 (81% finishing rate) and he entered as the No.7 in the same weight class but he lost two out of his last three bouts, against Jon Jones (=Jones vs Gustafsson) and Anthony Johnson (=Gustafsson vs Johnson). Between these two fights ‘The Mauler’ won over Jimi Manuwa (=Gustafsson vs Manuwa). ‘DC’ Cormier vs Gustafsson, main event of UFC 192, is valid for the Ufc light heavyweight title. Watch the video and rate this fight!