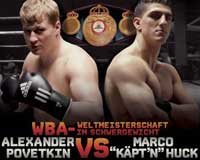 Review: 2012-02-25, nice and tough fight between Alexander Povetkin and Marco Huck, unfortunately the bout has not been very clean and the pace slows down a little bit in the last rounds: three stars (fight ended by majority decision – we are not agree with the judge’s decision). The undefeated Alexander Povetkin (23-0-0) entered as the No.3 heavyweight in the world while Marco Huck (34-1-0) entered as the No.3 cruiserweight. Povetkin vs Huck is valid for the WBA World heavyweight title (Povetkin’s second defense). Watch the video!