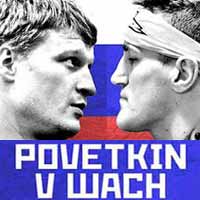 Review by AllTheBestFights.com: 2015-11-04, disappointing fight between Alexander Povetkin and Mariusz Wach: it gets two stars.

The former Wba Hw champion Alexander Povetkin entered this fight with a professional boxing record of 29-1-0 (21 knockouts) and he is ranked as the No.2 in the world while his opponent, Mariusz Wach, has an official record of 31-1-0 (17 knockouts) and he entered as the No.35 in the same weight class. Both boxers suffered their only loss against #1 Wladimir Klitschko: Povetkin was defeated by the Ukrainian in 2013 (=Klitschko vs Povetkin) and then he has won three bouts beating Mike Perez in his last one (=Povetkin vs Perez), while Wach lost to Wladimir in 2012 (=Klitschko vs Wach) and then he has won four consecutive fights. Povetkin vs Wach is valid for the WBC Silver heavyweight title. Watch the video and rate this fight!