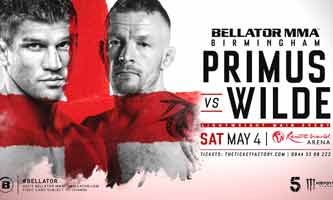 Review by AllTheBestFights.com: 2019-05-04, pretty good finish between Brent Primus and Tim Wilde: it gets three stars.

The black belt in Brazilian jiu-jitsu and former Bellator Lw champion Brent Primus entered this fight with a pro mma record of 8-1-0 (75% finishing rate) and he is ranked as the No.31 lightweight in the world but he comes off his first loss, suffered against Michael Chandler last year (Brent Primus vs Michael Chandler 2); before this bout, in 2017, he had beat Chandler in their first bout (Michael Chandler vs Brent Primus I).
His opponent, Tim Wilde, has a record of 12-3-0 (58% finishing rate) and he entered as the No.133 in the same weight class. He was defeated by Alexander Jacobsen in 2018 but then he has won over Ian Williams, Amin Ayoub and Anthony Dizy. Primus vs Wilde is the main event of Bellator Birmingham. Watch the video and rate this fight!