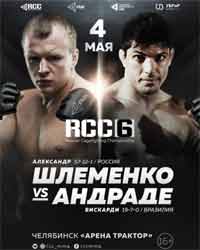 Review by AllTheBestFights.com: 2019-05-04, nice and tough exchanges between Alexander Shlemenko and Viscardi Andrade: it gets three stars.

The former Bellator and M-1 Mw champion Alexander Shlemenko entered this fight with a professional mma record of 57-12-0 (72% finishing rate) and he is ranked as the No.33 middleweight in the world. He lost three consecutive bouts between 2018 and 2018, the last one against Anatoly Tokov (Alexander Shlemenko vs Anatoly Tokov), but then he came back to win in December with Jonas Billstein (Alexander Shlemenko vs Jonas Billstein).
His opponent, the black belt in Brazilian jiu-jitsu Viscardi Andrade, has an official record of 20-7-0 (60% finishing rate) and he entered as the No.78 in the same weight class. He lost to Abdoul Abdouraguimov last year but then he has won over Sergey Martynov in 2019. Shlemenko vs Andrade is the main event of RCC 6 – Russian Cagefighting Championship. Watch the video and rate this fight!