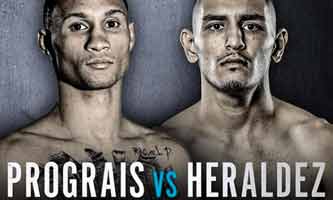 Review by AllTheBestFights.com: 2020-10-31, good fight between Regis Prograis and Juan Heraldez: it gets three stars.
The former Wbc and Wba super-Lw champion Regis Prograis entered this fight with a pro boxing record of 24-1-0 (20 KOs=83%) and he is ranked as the No.4 super lightweight in the world but he comes off his first loss, suffered against current #1 super-Lw Josh Taylor (Regis Prograis vs Josh Taylor); before this bout he had beat Kiryl Relikh in 2019 (Regis Prograis vs Kiryl Relikh) and Terry Flanagan in 2018 (Regis Prograis vs Terry Flanagan).
His opponent, the undefeated Juan Heraldez, has a record of 16-0-1 (10 knockouts) and he entered as the No.19 in the same weight class. In his last three fights he has defeated Maynard Allison and Eddie Ramirez but then he has tied with Argenis Mendez. Heraldez vs Prograis is on the undercard of Gervonta Davis vs Leo Santa Cruz. Watch the video and rate this fight!