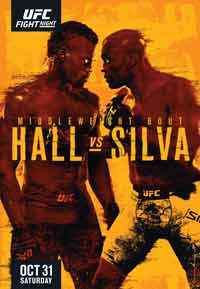 Review by AllTheBestFights.com: 2020-10-31, good fight between Andre Fili and Bryce Mitchell: it gets three stars.
Andre Fili entered this fight with a pro mma record of 21-7-0 (57% finishing rate) and he is ranked as the No.26 featherweight in the world. He has already fought twice in 2020 losing to Sodiq Yusuff and beating Charles Jourdain (Andre Fili vs Charles Jourdain).
His opponent, the undefeated black belt in Brazilian jiu-jitsu Bryce Mitchell, has a perfect record of 13-0-0 (69% submission victory rate – he has never won via ko/tko) and he entered as the No.55 in the same weight class. In his last three bouts he has won over Bobby Moffett, Matt Sayles and Charles Rosa. Mitchell vs Fili is on the undercard of Uriah Hall vs Anderson Silva – UFC Fight Night 181 (also known as UFC on ESPN+ 39 or UFC Vegas 12). Watch the video and rate this fight!