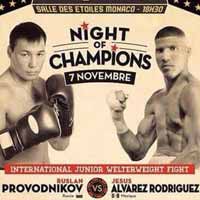 Review by AllTheBestFights.com: 2015-11-07, one sided fight between Ruslan Provodnikov and Jesus Alvarez Rodriguez: it gets two stars.

The former Wbo light-Ww champion Ruslan Provodnikov entered this fight with a boxing record of 24-4-0 (17 knockouts) and he is ranked as the No.8 super lightweight in the world (currently the #1 in this division is Terence Crawford) but he lost two out of his last three bouts: against Chris Algieri (=Provodnikov vs Algieri) and Lucas Matthysse (=Matthysse vs Provodnikov); between these two fights he won over Jose Luis Castillo (=Provodnikov vs Castillo).
His opponent, the undefeated Jesus Prudencio Alvarez Rodriguez, has a perfect record of 14-0-0 (11 KOs=79%) but he has not faced any notable opponents in his professional career. Provodnikov vs Rodriguez is the main event of the evening. Watch the video and rate this fight!