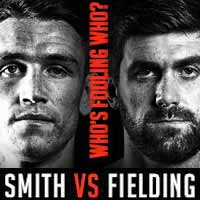 Review by AllTheBestFights.com: 2015-11-07, great start and nice exchanges: Callum Smith vs Rocky Fielding is close to get four stars!

Both undefeated and both from Liverpool, Callum Smith entered this fight with a perfect boxing record of 17-0-0 (12 knockouts) and he is ranked as the No.10 super middleweight in the world while his opponent, Rocky Fielding, has an official record of 21-0-0 (12 knockouts) and he entered as the No.12 in the same weight class (currently the #1 in this division is Andre Ward). Both boxers have already fought twice in 2015: Smith has won over Olegs Fedotovs and Christopher Rebrasse (=Smith vs Rebrasse) while Fielding has defeated Fedotovs and Brian Vera (=Fielding vs Vera). Smith vs Fielding is valid for the vacant BBBofC British super middleweight title. Watch the video and rate this fight!

Video: (Free embeddable video hosted on Springboardplatform.com and not uploaded by AllTheBestFights, to report it please visit this link where the video is hosted)