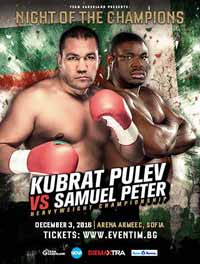 Review by AllTheBestFights.com: 2016-12-03, disappointing fight between Kubrat Pulev and Samuel Peter: it gets two stars.

Kubrat Pulev entered this fight with a pro record of 23-1-0 (12 knockouts) and he is ranked as the No.4 heavyweight in the world (currently the #1 in this division is Luis Ortiz). He suffered his only loss when he faced Wladimir Klitschko in 2014 (=Klitschko vs Pulev) but then he has won three bouts beating Dereck Chisora in 2016 (=Pulev vs Chisora).
His opponent, the former Wbc Hw champion Samuel Peter, has an official boxing record of 36-5-0 (29 KOs=81%) but he has fought just twice after his last defeat suffered in 2011, against Robert Helenius (=Helenius vs Peter). Pulev vs Peter is valid for the vacant WBA Inter-Continental heavyweight title. Watch the video and rate this fight!