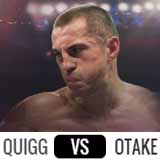 Review: 2014-11-22, pretty good fight between Scott Quigg and Hidenori Otake: it gets three stars. The undefeated Scott Quigg entered this fight with a boxing record of 29-0-2 (22 KOs=76%) and he is ranked as the No.5 super bantamweight in the world (currently the #1 in this division is Carl Frampton), the last time he was stopped in a draw was against Yoandris Salinas in 2013 (=Quigg vs Salinas); after this bout he won three consecutive fights, the last one against Stephane Jamoye (=Quigg vs Jamoye).
His opponent, Hidenori Otake, has an official record of 22-1-3 (9 knockouts) and he entered as the No.8 in the same weight class, he suffered his only defeat in 2007, against Manabu Koguchi, since then he has collected 16 victories and one draw. Quigg vs Otake is valid for the WBA World super bantamweight title (held by Quigg); undercard of Nathan Cleverly vs Tony Bellew 2. Watch the video and rate this fight!