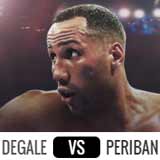 Review: 2014-11-22, pretty good finish between James DeGale and Marco Periban but it is not enough to get three stars. James DeGale entered this fight with a pro boxing record of 19-1-0 (13 knockouts) and he is ranked as the No.6 super middleweight in the world, he suffered his only defeat in 2011 when he faced George Groves (via majority decision Groves vs DeGale); since then he has won nine consecutive bouts, the last one against Brandon Gonzales (=DeGale vs Gonzales).
His opponent, Marco Antonio Periban, has a record of 20-2-1 (13 knockouts) and he entered as the No.20 in the same weight class but he comes off two losses, against Sakio Bika (=Bika vs Periban) and J’Leon Love, and one draw, against Badou Jack (=Jack vs Periban). DeGale vs Periban is on the undercard of Nathan Cleverly vs Tony Bellew 2. Watch the video and rate this fight!