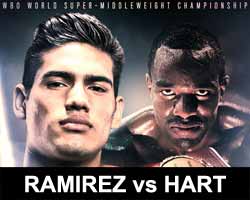 Both undefeated, the Wbo super-Mw champion Gilberto Ramirez Sanchez entered this fight with a perfect boxing record of 35-0-0 (24 knockouts) and he is ranked as the No.1 super middleweight in the world while his opponent, Jesse Hart, has an official record of 22-0-0 (18 KOs=82%) and he entered as the No.12 in the same weight class. Between 2016 and 2017 Ramirez fought twice beating Arthur Abraham (=Abraham vs Ramirez) and Max Bursak (=Ramirez vs Bursak) while Hart fought three times winning over Dashon Johnson, Andrew Hernandez and Alan Campa. Gilberto Ramirez vs Jesse Hart is valid for the WBO World super middleweight title (Ramirez’s second defense – they also face each other a second time on December 14, 2018 Gilberto Ramirez vs Jesse Hart 2) and it is on the undercard of Oscar Valdez vs Genesis Servania. Watch the video and rate this fight!