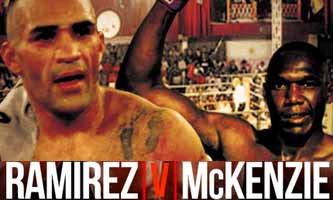 Review by AllTheBestFights.com: 2015-10-02, disappointing fight between Ovill McKenzie and Victor Ramirez: it gets two stars.

Ovill McKenzie entered this fight with a boxing record of 25-12-0 (13 knockouts) and he is ranked as the No.7 cruiserweight in the world (currently the #1 in this division is Grigory Drozd). He lost to Enzo Maccarinelli in 2013 (=McKenzie vs Maccarinelli 2) but after this bout he has won four consecutive fights beating Janne Forsman in his last one.
His opponent, Victor Emilio Ramirez, has an official record of 22-2-0 (17 KOs=77%) and he entered as the No.15 in the same weight class. He suffered his last defeat in 2009 when he faced Marco Huck, since then he has collected seven victories winning the interim Ibf belt in his last fight against Ola Afolabi (=Afolabi vs Ramirez). McKenzie vs Ramirez is valid for the IBF World cruiserweight title. Watch the video and rate this fight!