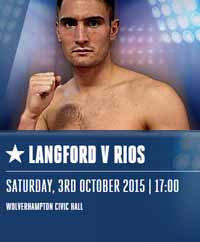 Review by AllTheBestFights.com: 2015-10-03, the fight between Paul Butler and Hector Guzman gets two stars.

The former Ibf bantamweight champion Paul Butler entered this fight with a boxing record of 18-1-0 (9 knockouts) and he is ranked as the No.20 super flyweight in the world. He has fought twice in 2015 losing to Zolani Tete (4-stars-fight Tete vs Butler) and winning over Gustavo Molina (=Butler vs Molina).
His opponent, Hector Rolando Guzman, has an official record of 14-1-0 (9 knockouts) and he comes off his first defeat, suffered against Zhanat Zhakiyanov. Butler vs Guzman is on the undercard of Cristian Rios vs Tommy Langford. Watch the video and rate this fight!