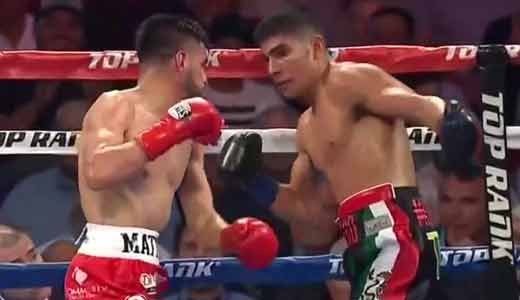 Review by AllTheBestFights.com: 2018-09-14, tremendous battle thanks to an amazing performance by both boxers: Jose Carlos Ramirez vs Antonio Orozco is one of the best boxing fights of 2018 and it gets four stars!

Both undefeated, the former Olympian and current Wbc light-Ww champion Jose Carlos Ramirez entered this fight with a perfect boxing record of 22-0-0 (16 knockouts) and he is ranked as the No.18 super lightweight in the world while his opponent, Antonio Orozco, has an official record of 27-0-0 (17 knockouts) and he entered as the No.11 in the same weight class. In their last three bouts Ramirez has won over Jake Giuriceo, Mike Reed (Jose Carlos Ramirez vs Mike Reed) and Amir Imam (Jose Carlos Ramirez vs Amir Imam) while Orozco has beat Abner Lopez (Antonio Orozco vs Abner Lopez), Keandre Gibson (Antonio Orozco vs Keandre Gibson) and Martin Honorio. Ramirez vs Orozco is valid for the WBC World super lightweight title (Ramirez’s first defense). Watch the video and rate this fight!