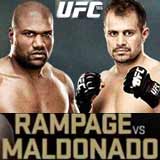 Review by AllTheBestFights.com: 2015-04-25, fight not particularly good between Quinton Jackson and Fabio Maldonado: it gets two stars.

The former Ufc ligh-Hw champion Quinton ‘Rampage’ Jackson entered this fight with a professional mma record of 35-11-0 (66% finishing rate) and he is ranked as the No.9 light heavyweight in the world (currently the #1 in this division is Jon Jones). Rampage lost three consecutive bouts between 2011 and 2013 (the last one against Glover Teixeira: Rampage vs Teixeira) and he was released by the Ufc but then he won the Bellator light-Hw tournament (Season 10) beating Muhammed ‘King Mo’ Lawal in the final (=Rampage vs Lawal) so he signed a new deal to return to the Ultimate Fighting Championship.
His opponent, Fabio Maldonado, has a record of 22-7-0 (73% finishing rate) and he entered as the No.29 in the same weight class. He fought three times last year defeating Gian Villante (=Villante vs Maldonado) and Hans Stringer (=Maldonado vs Stringer) but between these two fights he lost to Stipe Miocic (=Miocic vs Maldonado). Rampage vs Maldonado is on the undercard of Demetrious Johnson vs Kyoji Horiguchi – UFC 186. Watch the video and rate this fight!