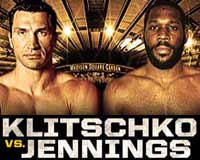 Review by AllTheBestFights.com: 2015-04-25, pretty good finish but with too much holding and too many interruptions during the rest of the fight: Wladimir Klitschko vs Bryant Jennings gets two stars.

The 1996 Olympic super heavyweight gold medalist Wladimir Klitschko (who now is 39 years old, nine years older than Jennings) entered this fight with a professional boxing record of 63-3-0 (53 KOs=84%) and he is ranked as the No.1 heavyweight in the world. He suffered his last defeat in 2004 when he faced Lamon Brewster for the vacant Wbo belt, since then he has collected 21 consecutive victories taking revenge on Brewster in 2007 and beating Alex Leapai (=Klitschko vs Leapai) and Kubrat Pulev in 2014 (=Klitschko vs Pulev).
His opponent, the undefeated Bryant Jennings, has a perfect record of 19-0-0 (10 knockouts) and he entered as the No.9 in the same weight class. He also fought twice last year winning over Artur Szpilka (=Jennings vs Szpilka) and Mike Perez (=Jennings vs Perez). Klitschko vs Jennings is valid for the WBA, WBO, IBF and IBO heavyweight titles (all held by Klitschko); first world title shot for Jennings. Watch the video and rate this fight!