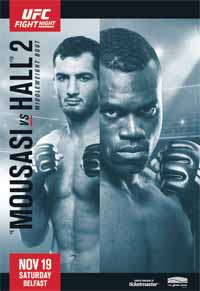 Review by AllTheBestFights.com: 2016-11-19, pretty good fight between Steven Ray and Ross Pearson: it gets three stars.

Steven Ray entered this fight with a pro mma record of 19-6-0 (74% finishing rate) and he is ranked as the No.70 lightweight in the world while his opponent, the black belt in tae-kwon-do and Tuf 9 tournament winner Ross Pearson, has a record of 19-12-0 (63% finishing rate). Both fighters have lost their last bout: Ray has been defeated by Alan Patrick while Pearson has lost to Jorge Masvidal. Before this bout Ross had lost also to Will Brooks (=Brooks vs Pearson). Ray vs Pearson is on the undercard of Gegard Mousasi vs Uriah Hall 2 – UFC Fight Night 99. Watch the video and rate this fight!