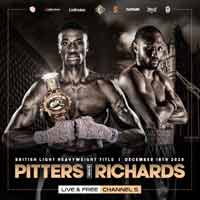 Review by AllTheBestFights.com: 2020-12-18, good finish between Shakan Pitters and Craig Richards: it gets three stars (take a look at our ranking of the best boxing fights of 2020).
The undefeated Shakan Pitters entered this fight with a perfect boxing record of 14-0-0 (4 knockouts) and he is ranked as the No.46 light heavyweight in the world. In his last three bouts he has won over Dmitrij Kalinovskij, Dec Spelman and Chad Sugden.
His opponent, Craig Richards, has an official record of 15-1-1 (8 knockouts) and he entered as the No.51 in the same weight class. He suffered his only loss when he faced Frank Buglioni in 2017, since then he has collected five victories and one draw, against Chad Sugden in his last one. Richards vs Pitters is valid for the BBBofC British light-heavyweight title. Watch the video and rate this fight!

(Free embeddable video hosted on Youtube or Dailymotion or Facebook or Ok.ru and not uploaded by AllTheBestFights)

« 2020 BOXING fight – Kevin Lerena vs Patrick Ferguson – full fight Video
Best fights of the week 51, year 2020 »
HELP US!!! Since the CORONAVIRUS pandemic started, AllTheBestFights.com has struggled to survive! If you have enjoyed this website for the past 10 years, today we ask you for a little help: