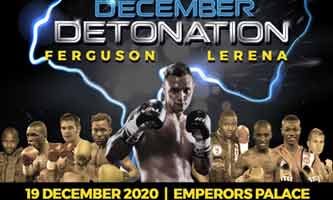 Review by AllTheBestFights.com: 2020-12-19, some good exchanges between Kevin Lerena and Patrick Ferguson but it is not enough to get three stars: it gets two (take a look at our ranking of the best boxing fights of 2020).
The Ibo Cw champion Kevin Lerena entered this fight with a professional record of 25-1-0 (12 knockouts) and he is ranked as the No.7 cruiserweight in the world (currently the #1 in this division is Mairis Briedis). He suffered his only loss when he faced Johnny Muller in 2014, since then he has won 14 consecutive bouts beating Vasil Ducar, Sefer Seferi and Firat Arslan in his last three (Kevin Lerena vs Firat Arslan).
His opponent, Patrick Ferguson, has a boxing record of 17-2-1 (13 KOs=76%) and he entered as the No.108 in the same weight class. He lost two consecutive bouts in 2019, against Abraham Tabul and Benjamin Kelleher, but then he has won three fights defeating Miguel Cubos in his last one. Ferguson vs Lerena is the main event of the evening. Watch the video and rate this fight!