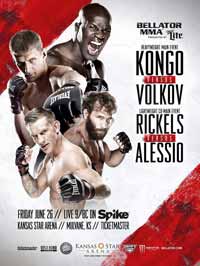 Review by AllTheBestFights.com: 2015-06-26, some good shots with a disappointing finish: David Rickels vs John Alessio gets two stars.

The Bellator Lw tournament winner (season 8) David Rickels entered this fight with a pro mma record of 16-3-0 (62% finishing rate) and he is ranked as the No.51 lightweight in the world while his opponent, John Alessio, has a record of 35-17-0 (71% finishing rate). Both fighters have lost their penultimate fight but then they came back to win: Rickels was defeated by Patricky Freire (=Rickels vs Freire) and then he won with Davi Ramos while Alessio lost to Will Brooks (=Brooks vs Alessio) and then he beat Eric Wisely. Rickels vs Alessio is on the undercard of Cheick Kongo vs Alexander Volkov – Bellator 139. Watch the video and rate this fight!

Result: Click here to show the fight’s result
David Rickels vs John Alessio (No Contest illegal knee at 2:24, round 1)