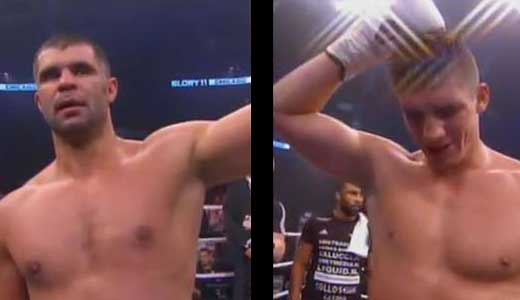 Review: 2013-10-12, great performance and amazing pace by both fighters that exchanged shot for shot in an exciting and tough fight: in a fight like this, there is not a loser but two winners, Daniel Ghita vs Rico Verhoeven is definitely one of the best kickboxing fights of 2013 and it gets four stars! Daniel Ghita (49-9-0) entered as the No.4 heavyweight in the world while Rico Verhoeven (41-7-1) entered as the No.6. Ghita vs Verhoeven is the final of Glory heavyweight world championship tournament (they also faced each other a second time on Jun 21, 2014 Verhoeven vs Ghita 2); undercard of Tyrone Spong vs Nathan Corbett 2 – Glory 11. Watch the video!