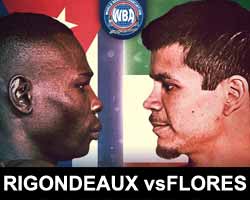 Review by AllTheBestFights.com: 2017-06-17, pretty good finish but not a ‘clean’ victory: Guillermo Rigondeaux vs Moises Flores gets two stars.

Both undefeated, the 2000 and 2004 Olympic bantamweight gold medalist and Wba super-Bw champion Guillermo Rigondeaux entered this fight with a perfect record of 17-0-0 (11 knockouts) and he is ranked as the No.1 super bantamweight in the world while his opponent, the Ibo and interim Wba super-Bw champion Moises Flores, has a boxing record of 25-0-0 (17 knockouts) but he is not ranked as he hasn’t fought since June 11, 2016 when he defeated Paulus Ambunda; before this bout, in 2015, ‘Chucky’ Flores had beat Oscar Escandon (=Escandon vs Flores) and Luis Emanuel Cusolito (=Flores vs Cusolito). ‘El Chacal’ Rigondeaux fought just twice beatween 2015 and 2016 defeating Drian Francisco (=Rigondeaux vs Francisco) and James Dickens (=Rigondeaux vs Dickens). Guillermo Rigondeaux vs Moises Flores is valid for the WBA and IBO World super bantamweight titles; undercard of Andre Ward vs Sergey Kovalev 2. Watch the video and rate this fight!

Result: Click here to show the fight’s result
Guillermo Rigondeaux vs Moises Flores (No contest – the referee’s decision [ko] was reversed by NSAC on June 26)