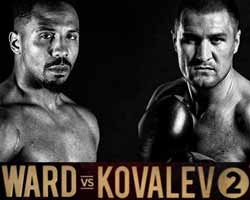 Review by AllTheBestFights.com: 2017-06-17, disappointing finish but the rest of the fight was pretty good: Andre Ward vs Sergey Kovalev 2 gets three stars.

The undefeated 2004 Olympic light-Hw gold medalist and world champion in two different weight classes Andre Ward entered this fight with a perfect boxing record of 31-0-0 (15 knockouts) and he is ranked as the No.1 light heavyweight in the world. “SOG” Ward fought three times last year winning over Sullivan Barrera (=Ward vs Barrera), Alexander Brand (=Ward vs Brand) and Sergey Kovalev in their first fight (but it was a controversial decision, Kovalev vs Ward I).
His opponent, the former WBA, IBF and WBO light-Hw champion Sergey Kovalev, has an official record of 30-1-1 (26 KOs=87%) and he entered as the No.2 in the same weight class. Before losing to Andre Ward in his last bout, “Krusher” Kovalev fought twice in 2016 beating Jean Pascal (=Kovalev vs Pascal 2) and Isaac Chilemba (=Kovalev vs Chilemba). Andre Ward vs Sergey Kovalev 2 is valid for the WBA, IBF and WBO World light heavyweight titles (Ward’s first defense). Watch the video and rate this fight!

Their previous fight: Sergey Kovalev vs Andre Ward I