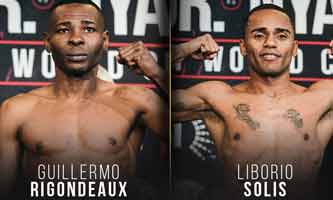 Review by AllTheBestFights.com: 2020-02-08, fight not so exciting between Guillermo Rigondeaux and Liborio Solis: it gets two stars.

The 2000 and 2004 Olympic bantamweight gold medalist and former Wba super-Bw champion Guillermo Rigondeaux entered this fight with a pro boxing record of 19-1-0 (13 knockouts) and he is ranked as the No.5 bantamweight in the world (currently the #1 in this division is Naoya Inoue). He suffered his only loss when he faced Vasyl Lomachenko in 2017 (Vasyl Lomachenko vs Guillermo Rigondeaux), after this bout he has beat Giovanni Delgado (Guillermo Rigondeaux vs Giovanni Delgado) and Julio Ceja (Guillermo Rigondeaux vs Julio Ceja).
His opponent, the former Wba super-Flw champ Liborio Solis, has a record of 30-5-1 (14 knockouts) and he entered as the No.24 in the same weight class. He suffered his last loss when he faced Jamie McDonnell in 2016 (Jamie McDonnell vs Liborio Solis); since then he has collected one no-contest and five victories beating Jose Luis Bellorin and Karluis Diaz in 2019. Rigondeaux vs Solis is valid for the vacant WBA World bantamweight title; undercard of Gary Russell Jr vs Tugstsogt Nyambayar. Watch the video and rate this fight!