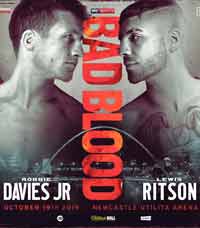 Robbie Davies Jnr, has an official record of 19-1-0 (13 knockouts) and he entered as the No.11 super lightweight in the world. He lost to Michal Syrowatka in 2017 but then he took revenge on him in 2018 (Michal Syrowatka vs Robbie Davies Jnr 2) and he also won three other fights beating Glenn Foot, Joe Hughes (Robbie Davies Jnr vs Joe Hughes) and Michal Dufek.
His opponent, Lewis Ritson entered this fight with a boxing record of 19-1-0 (12 knockouts) and he is ranked as the No.26 in the same weight class. He suffered his only loss when he faced Francesco Patera in 2018 (four-stars fight, Lewis Ritson vs Francesco Patera), after this bout he has won over German Argentino Benitez and Marek Jedrzejewski. Davies vs Ritson is the main event of the evening. Watch the video and rate this fight!