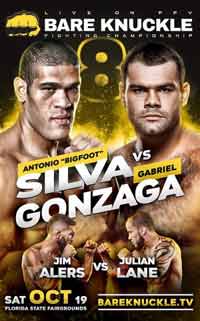 Review by AllTheBestFights.com: 2019-10-19, pretty good finish between Antonio Bigfoot Silva and Gabriel Gonzaga: but it is not enough to get three stars: it gets two.

The black belt in judo, karate and Brazilian jiu-jitsu Antonio Bigfoot Silva entered this fight with a pro mma record of 19-12-0 (89% finishing rate) but he is not ranked as he hasn’t fought since June 2, 2017 when he was defeated by Vitaly Minakov (Vitaly Minakov vs Antonio Bigfoot Silva); after this bout he has faced Rico Verhoeven in a kickboxing fight losing it (Rico Verhoeven vs Antonio Bigfoot Silva).
His opponent, the black belt in Bjj Gabriel Gonzaga, has an official record of 17-12-0 (94% finishing rate) and he is also not ranked as he hasn’t fought since May 5, 2018 when he was defeated by Aleksander Emelianenko (Aleksander Emelianenko vs Gabriel Gonzaga). He fought also once as a professional boxer, beating Alejandro Esquilin Santiago in 2017. Bigfoot Silva vs Gonzaga is the main event of BKFC 8 (Bare Knuckle Fighting Championship, organization in which “fighters are not allowed to wrap their hands to within one-inch of the knuckle”). Watch the video and rate this fight!