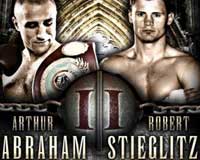 Review: 2013-03-23, good fight with a great third round: the rematch between Arthur Abraham and Robert Stieglitz gets three stars. Arthur Abraham (36-3-0, 28 KOs) entered as the No.4 super middleweight in the world while Robert Stieglitz (43-3-0, 24 KOs) entered as the No.8. In their first fight Abraham defeated Stieglitz by unanimous decision (August 25, 2012); this second fight is valid again for the WBO super middleweight title (Abraham’s second defense). Watch the video!