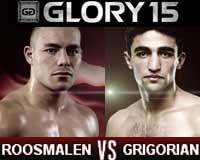 Review: 2014-04-12, excellent fight between Robin van Roosmalen and Marat Grigorian: it was the best fight of Glory 15, three stars. Robin van Roosmalen entered this fight with a professional kickboxing record of 42-14-3 (14 knockouts) and he is ranked as the No.3 super welterweight in the world; he fought four times in 2013 losing only his last bout against Andy Ristie (final of Glory lightweight tournament van Roosmalen vs Ristie).
His opponent, Marat Grigorian, has an official record of 35-4-1 and he entered as the No.12 in the same weight class, he suffered his last defeat in 2011 when he faced Yohan Lidon (in a bout valid for the “It’s Showtime title -73 kg”: Lidon vs Grigorian), since then he has collected five victories and one no-contest. Van Roosmalen vs Grigorian is the main event of Glory 15 Istanbul. Watch the video and rate this fight!