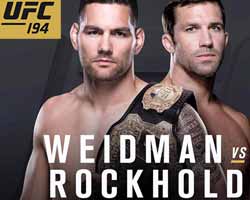 Review by AllTheBestFights.com: 2015-12-12, very nice fight between Chris Weidman and Luke Rockhold: it gets three stars (UFC Fight of the Night).

The undefeated black belt in Bjj Chris Weidman entered this fight with a perfect mma record of 13-0-0 (69% finishing rate) and he is ranked as the No.1 middleweight in the world. He won the Ufc Mw belt in 2013 beating Anderson Silva (4-stars-fight, Silva vs Weidman I) and he defended his title three times: against ‘The Spider’ in their rematch (=Weidman vs Silva II), with Lyoto Machida in 2014 (=Weidman vs Machida) and Vitor Belfort in 2015 (=Weidman vs Belfort).
His opponent, the black belt in Brazilian jiu-jitsu and former Strikeforce Mw champion Luke Rockhold, has a record of 14-2-0 (86% finishing rate) and he entered as the No.2 in the same weight class. He suffered his last loss when he faced Vitor Belfort in 2013 (one of the best knockouts of the year, Belfort vs Rockhold) but since then he has won four consecutive fights defeating Lyoto Machida in his last one (=Machida vs Rockhold). Weidman vs Rockhold, co-main event of the “UFC 194 Aldo vs McGregor”, is valid for the Ufc middleweight title (Weidman’s fourth defense). Watch the video and rate this fight!