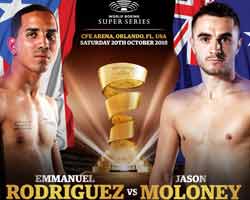 Review by AllTheBestFights.com: 2018-10-20, nice and close fight between Emmanuel Rodriguez and Jason Moloney: it gets three stars.

Both undefeated, the Ibf Bw champion Emmanuel Rodriguez entered this fight with a perfect record of 18-0-0 (12 knockouts) and he is ranked as the No.6 bantamweight in the world (currently the #1 in this division is Luis Nery) while his opponent, Jason Moloney, has a boxing record of 17-0-0 (14 KOs=82%) and he entered as the No.8 in the same weight class. In their last three bouts Rodriguez had defeated Robinson Lavinanza, Giovanni Delgado and Paul Butler (Paul Butler vs Emmanuel Rodriguez) while Moloney has won over Julias Kisarawe, Immanuel Naidjala and Kohei Kono (Jason Moloney vs Kohei Kono). Rodriguez vs Moloney is the quarter-final of the World Boxing Super Series bantamweight tournament (WBSS – Muhammad Ali Trophy) and it is valid for the IBF World bantamweight title (Rodriguez’s first defense). Watch the video and rate this fight!