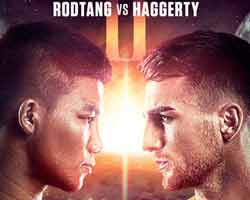 Review by AllTheBestFights.com: 2020-01-10, good fight between Rodtang Jitmuangnon and Jonathan Haggerty 2: it gets three stars. Moreover this match took third place in the ‘Top 5 Kickboxing Fights of the Year 2020‘ (ranking generated by our users).

The former Omnoi Stadium and current ONE Muay Thai Flw champion Rodtang Jitmuangnon entered this fight with a professional kickboxing record of 260-41-10 and he is ranked as the No.5 super featherweight in the world. He lost to Rungkit Morbeskamala in 2018 but since then he has won nine consecutive fights beating Walter Goncalves in his last one.
His opponent, the former Iska, Wbc and ONE world champ Jonathan Haggerty, has an official record of 16-3-0 (10 knockouts) and he entered as the No.11 in the same weight class. He fought three times last year defeating Joseph Lasiri and Sam-A Gaiyanghadao but then he lost to Rodtang Jitmuangnon in their first fight (August 2, 2019). Rodtang vs Haggerty 2, main event of “ONE Championship: A New Tomorrow”, is valid for the ONE Muay Thai flyweight title (Rodtang’s second defense) – ONE 106. Watch the video and rate this fight!

Event: ONE Championship: A New Tomorrow