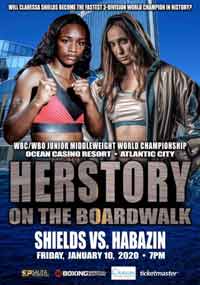 Review by AllTheBestFights.com: 2020-01-10, fight not so exciting between Claressa Shields and Ivana Habazin: it gets two stars.

The undefeated 2012, 2016 Olympic gold medalist and world champion in two different Claressa Shields entered this fight with a professional boxing record of 9-0-0 (2 knockouts) and she is ranked as the No.1 women’s middleweight in the world. In her last three fights she has won over Hannah Rankin (Claressa Shields vs Hannah Rankin), Femke Hermans (Claressa Shields vs Femke Hermans) and Christina Hammer (Claressa Shields vs Christina Hammer).
Her opponent, Ivana Habazin, has an official record of 20-3-0 (7 knockouts) and she entered as the No.13 super welterweight. She lost to Mikaela Lauren in 2016 but then she has won five bouts defeating Eva Bajic in her last one. Shields vs Habazin is valid for the vacant WBC and vacant WBO World Female super welterweight titles. Watch the video and rate this fight!