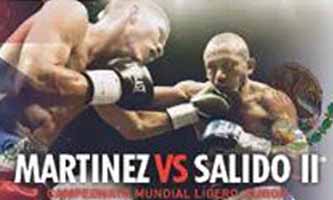 Roman Martinez entered this fight with a boxing record of 29-2-2 (17 knockouts) and he is ranked as the No.6 super featherweight in the world while his opponent, the former world champion in two different weight divisions Orlando Salido, has an official record of 42-13-2 (29 knockouts) and he entered as the No.14 in the same weight class (currently the #1 in this division is Takashi Uchiyama). In their first fight ‘Siri’ Salido was defeated by ‘Rocky’ Martinez in twelve rounds (five months ago, Salido vs Martinez I) while Martinez’s last loss occurred in 2013, against Mikey Garcia (=Garcia vs Martinez). Salido vs Martinez 2 is valid for the WBO World super featherweight title (Martinez’s first defese); undercard of Floyd Mayweather Jr vs Andre Berto. Watch the video and rate this fight!