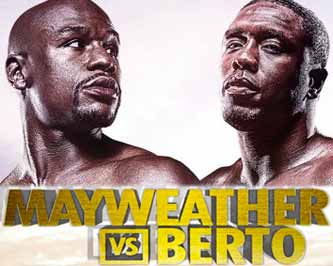 The undefeated Floyd Mayweather Jr entered this fight with a perfect boxing record of 48-0-0 (26 knockouts) and he is ranked as the No.1 welterweight in the world. ‘Money’ has won world titles in five different weight classes and he has already fought once in 2015 beating Manny Pacquiao (=Mayweather vs Pacquiao); if ‘Pretty Boy’ beats Berto, he will tie Rocky Marciano’s 49-0 boxing record moreover this is expected to be Mayweather’s retirement fight.
His opponent, the former Wbc, Wba and Ibf Andre Berto, has an official record of 30-3-0 (23 knockouts) and he entered as the No.21 in the same weight class. He suffered two consecutive losses between 2012 and 2013, against Robert Guerrero (=Guerrero vs Berto) and Jesus Soto Karass (=Berto vs Soto Karass), but then he came back to win beating Steve Upsher Chambers (=Berto vs Chambers) and Josesito Lopez (=Berto vs Lopez). Mayweather vs Berto is valid for the WBC and WBA Super World welterweight titles (both held by Mayweather). Watch the video and rate this fight!