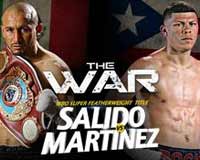 Review by AllTheBestFights.com: 2015-04-11, good pace and some nice exchanges: the fight between Orlando Salido and Roman Martinez was very close and it gets three stars.

The former Ibf and Wbo featherweight world champion Orlando Salido entered this fight with a professional boxing record of 42-12-2 (29 knockouts) and he is ranked as the No.8 super featherweight in the world (currently the #1 in this division is Takashi Uchiyama) while his opponent, Roman Martinez, has an official record of 28-2-2 (17 knockouts) and he entered as the No.13 in the same weight class. Both boxers suffered their last defeat in 2013 and both against Mikey Garcia: Salido lost in January (=Salido vs Garcia) while ‘Rocky’ Martinez was defeated in November (=Garcia vs Martinez). After losing Salido won the vacant Wbo Fw title against Orlando Cruz (=Salido vs Cruz), defended the belt with Vasyl Lomachenko (=Salido vs Lomachenko) and then he moved up in weight class to the super-Fw division beating Terdsak Kokietgym in one of the best boxing fights of 2014 (valid for the interim Wbo super-Fw title=Salido vs Kokietgym). Martinez instead, after losing to Garcia, has fought just once beating Herbert Quartey. ‘Siri’ Salido vs Martinez is valid for the WBO World super featherweight title. Watch the video and rate this fight!