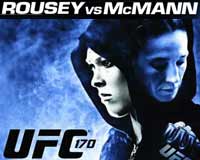 Review: 2014-02-22, aggressive start and good finish: Ronda Rousey vs Sara McMann gets three stars (UFC Performance of the Night). Both undefeated, the champion Ronda Rousey entered this fight with a perfect record of 8-0-0 (100% armbar submission victory rate) and she is ranked as the No.1 women’s bantamweight in the world, she is a 4th dan black belt in judo and she won the bronze medal in judo at the Olympic games in Beijing 2008.
Her opponent, Sara McMann, has an official mma record of 7-0-0 (57% finishing rate) and she entered as the No.4 in the same weight class, she is 33 years old (six years older than Rousey) and she also won a medal at the Olympic games (silver medal in freestyle wrestling, Athens 2004). Rousey vs McMann, main event of UFC 170, is valid for the Ufc women’s bantamweight title. Watch the video and rate this fight!