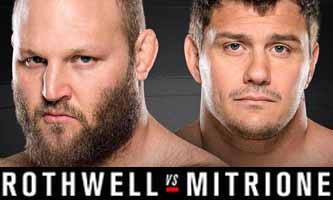 Review by AllTheBestFights.com: 2015-06-06, Ben Rothwell vs Matt Mitrione gets three stars thanks to a good finish.

Ben Rothwell entered this fight with a pro mma record of 34-9-0 (91% finishing rate) and he is ranked as the No.9 heavyweight in the world while his opponent, the black belt in karate Matt Mitrione, has a record of 9-3-0 (89% ko/tko victory rate – he has never won via submission) and he entered as the No.12 in the same weight class (currently the #1 in this division is Cain Velasquez). Both fighters suffered their last loss in 2013: Rothwell was defeated by Gabriel Gonzaga (=Gonzaga vs Rothwell) and then he won over Brandon Vera (=Rothwell vs Vera) and Alistair Overeem (=Overeem vs Rothwell) while Mitrione lost to Brendan Schaub (=Schaub vs Mitrione) but then he has won three consecutive bouts, the last one with Gonzaga (=Gonzaga vs Mitrione). Rothwell vs Mitrione is on the undercard of Tim Boetsch vs Dan Henderson – UFC Fight Night 68. Watch the video and rate this fight!